Kimchi - the national dish of Korea and staple side dish on every Korean table - needs no formal introduction. Recognized long for its range of health benefits, this fiery, fermented vegetable side dish is rooted in tradition. Among the hundreds of kimchi varieties in Korea, the Napa cabbage variety, also known as pogi kimchi or tongbaechu kimchi, is the most iconic and common and is generally referred to by the catch-all name, kimchi.

Nowadays, one can easily skip the seemingly labor intensive process of making kimchi and purchase kimchi sold in jars or vacuum packs in supermarkets, but there is something irreplaceable in old-fashioned, authentic homemade kimchi.

As with almost anything homemade, you get to tweak and customize.
And it's not just how spicy or mild you want your kimchi to be. Various salted seafood is used in kimchi to add a depth of flavor and to aid in the fermentation process. Whether it is salted shrimp, squid, or dried fish, the complex pungency of seafood is truly irreplaceable in kimchi. But if you are like me who is allergic to crustaceans, omit the shrimps and go with dried pollack and even anchovy paste for the unmistakable essence of the sea.


Making kimchi is like a mini science project.
Admit it, you were religiously watering and watching your beansprouts grow as an elementary school kid. Making kimchi from scratch is so much more fun than that. You get to get in and dirty, watch it ferment, and reap the benefits of all that effort in as short as a few days as it ripens!

You are participating in an age old tradition.
Aside from adding a human touch to what you eat, making homemade kimchi allows you to experience hands-on the wisdom, knowledge, and tradition passed down from grandmother to mother, mother to daughter, generation after generation for centuries in Korea. As I made my own kimchi in my kitchen, I could almost hear the stories and laughter shared among women who gather for gimjang, where enormous quantities of kimchi is prepared communally to last through the harsh winter. Try it, you'll know what I mean.

A major bucket list item gets checked off.
Making kimchi, nevertheless, is not a once-in-a-lifetime event. It only gets better with practice!

After much research and trial, my recipe is based loosely on Korean American Chef Esther Choi's recipe which has been passed down from her grandmother. I have modified certain steps in preparation to make it simpler for home cooks. Apple or pear puree is added for a nice tinge of sweetness, whereas Korean dried pollack adds immense depth of flavor to the kimchi.
What you'll need...
1 head of Korean Napa cabbage, cut lengthwise, quartered
5 tablespoons rock salt
70g of Korean dried pollack (bugeochae), shredded
1 medium daikon radish (1lb), cut into 2-inch matchsticks
1 small carrot, cut into 2-inch matchsticks (optional)
1 bunch of scallions, cut into 2-inch pieces


Prepping and salting the Napa Cabbage

To split a Napa cabbage in half, cut a slit in the base of the cabbage up to a third of the total length of the cabbage, gently pull the two halves apart. Repeat for each half to quarter the cabbage.

Add 1 1/2 cup of water inside a basin, dissolve 2 tablespoons of rock salt, wet the quartered Napa cabbage inside the basin and sprinkle salt between each layer of leaf. Let rest for at least two hours, turning them over every 30 minutes.

Rinse each quarter well under running water to remove the salt. Squeeze out excess water and let drain in a colander.

In a small saucepan, add the rice flour and 2 cups of water over medium heat. Whisk constantly. Cook for 10 minutes or until the mixture thickens. Set aside to cool.

1. In a blender, blend together the apple, onion, garlic, and ginger with the mirin.
2. Soften the dried pollack with some lukewarm water. Drain.
3. In a big bowl, combine the rice gruel, apple mixture, daikon radish, carrot, scallion, dried fish, and the rest of the seasoning ingredients and massage everything well to become a paste.

Bring the drained cabbage quarters into the mixture and spread the paste onto every single leaf. Tightly pack the kimchi into jars or containers with fitted lids or cover tightly with plastic.

Allow the kimchi to sit in room temperature for at least two days, or longer for a stronger flavor. The warmer and more humid the environment is, the faster the kimchi will ferment. Store in refrigerator once the kimchi begins to ferment and use as needed. Refrigerating slows down the fermentation process, which makes the kimchi more and more sour as time goes on. 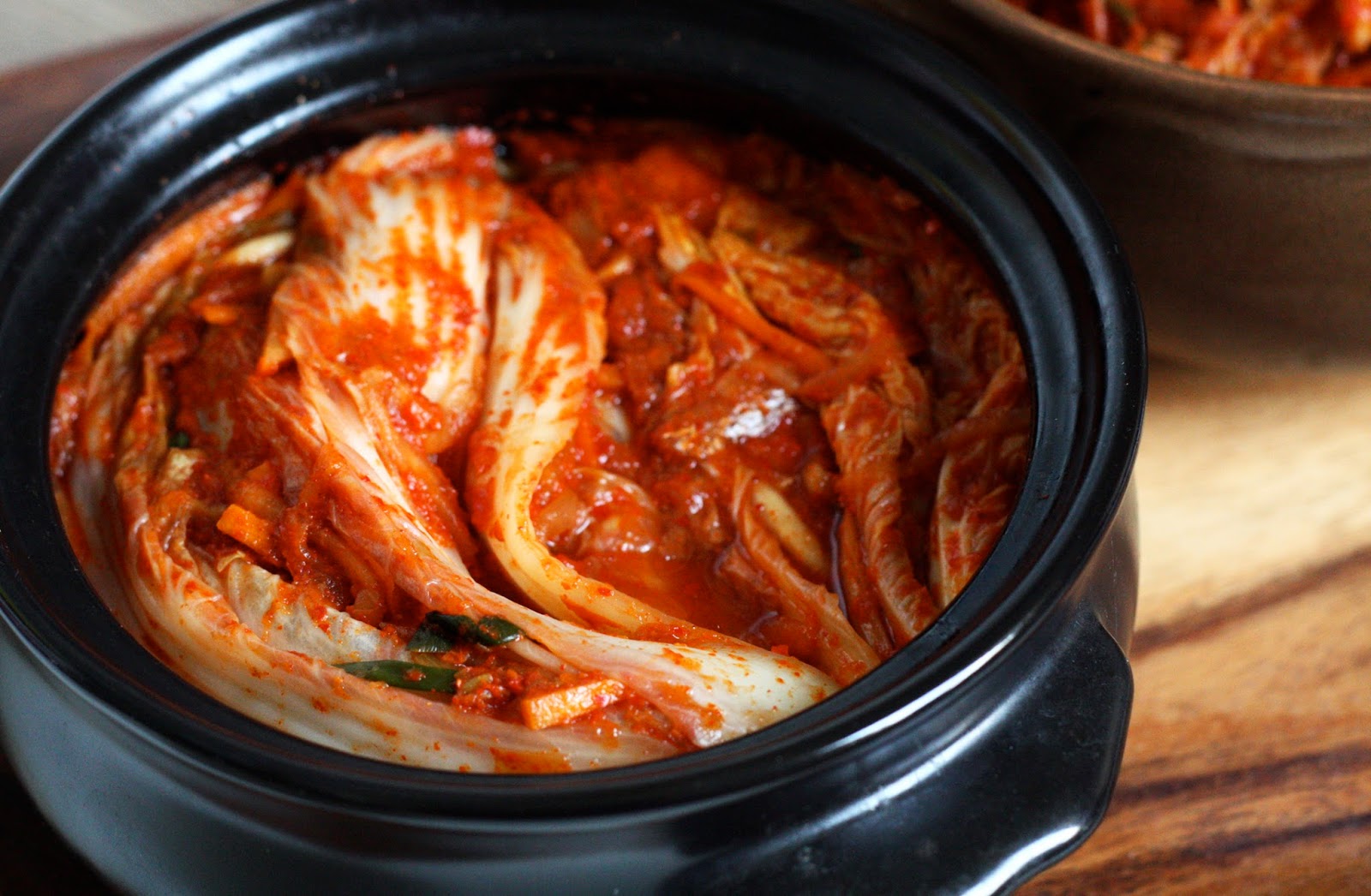