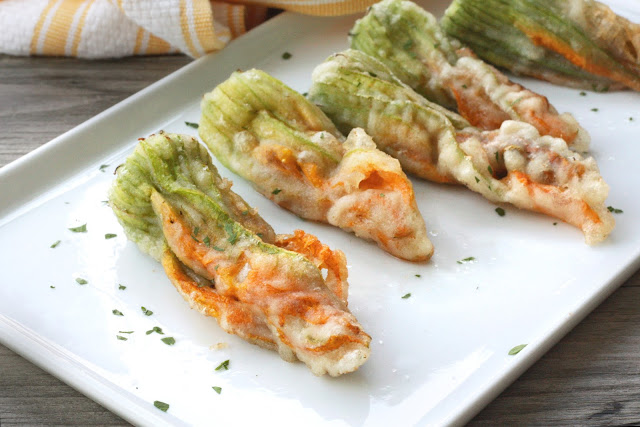 While hastily scanning through the produce aisles during a last minute groceries shopping spree in Italy, my eyes rested firmly on little lanterns of vibrant sunshine orange and soft green in a cooler. Plump, frilly, ethereal flowers they are: zucchini blossoms. Fragile to the touch and delicate to the tongue, these blooms are sure signs of an Italian summer's bounty, so rarely seen elsewhere or in restaurants abroad. I could barely remember when I last tasted these seasonal treats in Italy (they were sadly "finito" when I ordered them at a trattoria in Orvieto just this weekend when my craving hit!). Without second thought, in goes a package into my shopping basket. 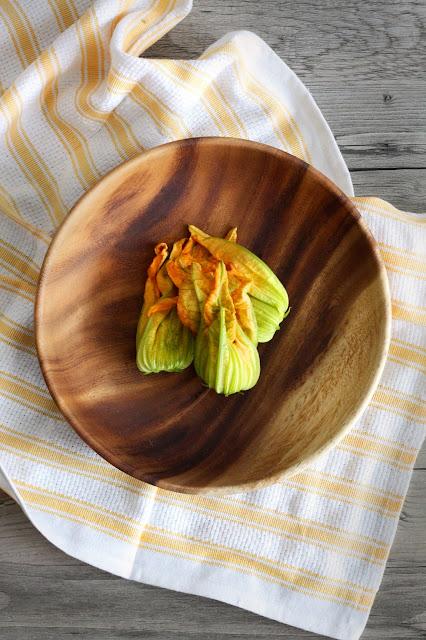 Zucchini flowers may not taste a whole lot on its own, but they sure are aesthetically appealing and a delight to bite into stuffed with cheese and fried golden for a savory antipasto. Imagine crisped yellow petals giving way to a cavern of hot, oozing cheese, then finally rounding off with a mouthful of crunch around the receptacle of the blossom. I am not the kind of guy who is easily talked into dispensing a pot full of frying oil and making a greasy splatter at a kitchen, but when we have such an exotic delicacy in hand, such operation demands no justification.

Here are my special thanks to a friend from Australia who has home stayed with first generation Italian immigrants since school age and years of managing an Italian restaurant. Together I have learned to stuff the flowers and fry them in a tempura-like batter that is light and airy. 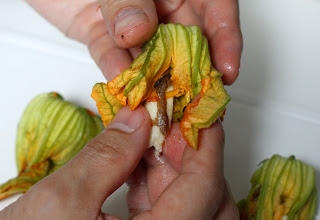 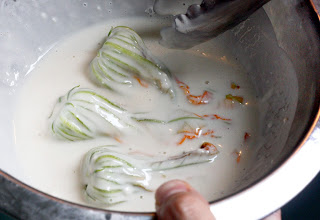 1. In a small bowl, roughly mash the Camembert with anchovies until creamy. Gently open the zucchini blossoms and pluck out any stamens. With a small spoon, scoop a heaping spoonful of the cheese mixture and carefully stuff into the heart of each flower without overfilling. Ensure that the cheese mixture is completely covered by gently twisting the top of each blossom to enclose the mixture. Repeat with remaining flowers. 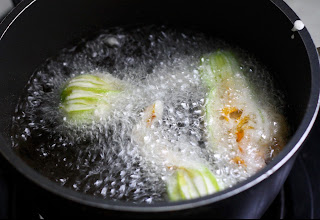 2. Heat oil in a pot over medium heat. Make the batter by whisking flour and cold water until smooth. The batter should trickle in a steady stream when lifted with the whisk and not too thick. Add more water or flour to obtain the right consistency.

3. Dip a stuffed zucchini blossom into the batter and twirl gently between fingers until the flower is fully, but lightly, coated. Repeat with the remaining blossoms.

4. Working in batches, slip blossoms into the hot oil. Do not crowd the pan. Lightly fry for 1 to 2 minutes per side until the flowers are golden brown. Drain on paper towels.

Serve immediately with a scatter of chopped parsley and some freshly ground pepper. Buon appetito!! 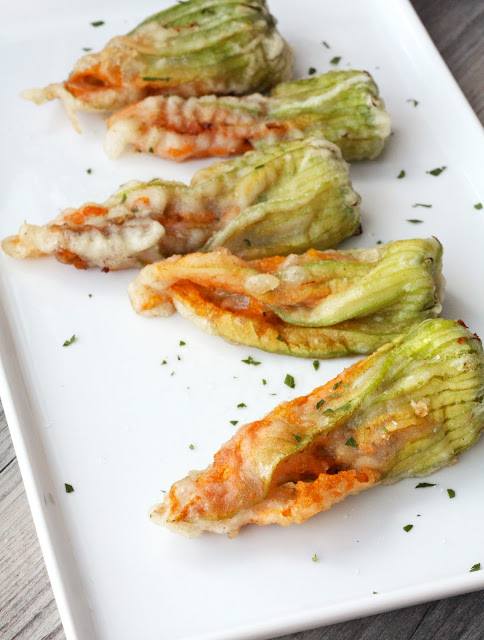 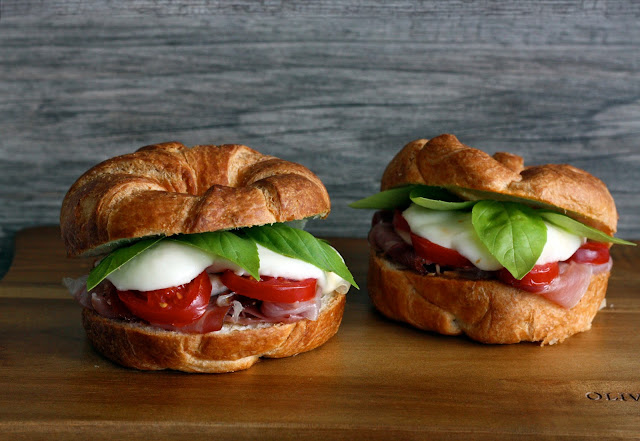 Think juicy, sweet vine-ripened tomatoes, and fresh, moist mozzarella melting underneath a blanket of fragrant, garden-fresh basil - all wedged into a buttery, flaky, toasted croissant... I think you get the idea.

How it has not occurred to me until now that the Insalata Caprese actually resembles the colors of the Italian flag, I don't know. But what I do know is that in Italy, this genuinely Neapolitan antipasto is a tribute to the essence of fresh ingredients that is almost emblematic of the country's renowned gastronomy. The key is to keep the dish simple, dressed at most with a touch of olive oil, and never any balsamic vinegar or pesto.


When serving this Italian classic in a breakfast sandwich, I think we are allowed to be bold and play it up just a little. I recently returned from northern Italy with a bunch of produce and groceries, among which are the ever important balls of mozzarella and parcels of deli-sliced prosciutto.

Hunger strikes, and the idea of a "croissan'wich" comes. Perfect to jumpstart a sluggish weekend or as a hangover cure, this "recipe" is really more an idea than a proper recipe. If you swear by dressing your sandwich with a spread, try a light smear of tangy Garlic Balsamic Mayo that takes only minutes to make. And if you swear by meat, trade greasy bacon for a couple slices of speck (Italian cured and smoked meat) ...and voilà, we just have an irresistable spin on the classic BLT with an unmistakably Italian flair. 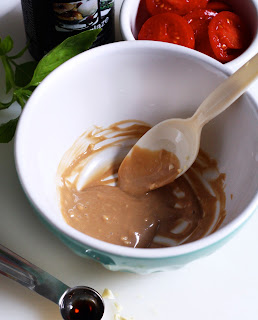 1. Preheat oven to 200C/375F. In a small bowl, mix together mayonnaise, garlic and balsamic glaze and set aside. Slice the croissants lengthwise without separating the two halves. Lightly spread mayo mixture on the bottom half of the croissant.

2. Layer on speck, followed by tomatoes and mozzarella, insulating the tomatoes well from direct contact with the croissant to avoid soggy buns.

3. Pop the sandwiches into the oven open-faced for 8-10 minutes or until the cheese begins to melt and croissant is nicely toasted without charring. Remove from oven and top mozzarella with whole basil leaves. Enjoy the sensation of stretching cheese and the explosion of fresh flavors! Buon appetito and have a great weekend. 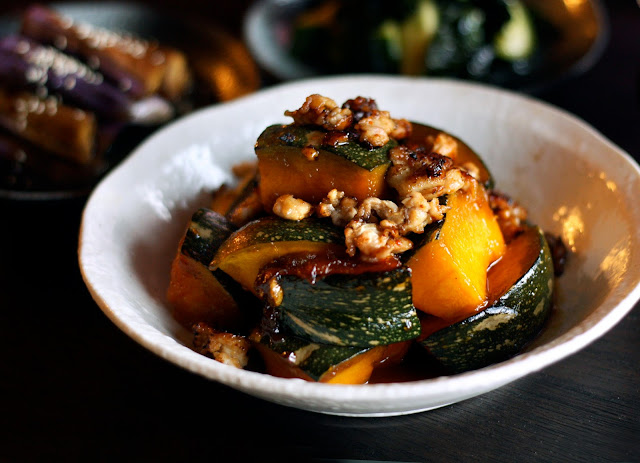 We may be no stranger to Japanese cuisine - as diverse as it can be - given its international presence and penetration into pop culture and our day-to-day diet. But when it comes to Japanese home cooking, it is an infinite universe yet to be fully explored and appreciated by food-lovers the world over.


Outside of the usual dining favorites, namely sushi, tonkatsu, ramen, yakitori, shabu-shabu (the list is really rather inexhaustible, to our bellies' delight), my exposure to authentic Japanese home cooking has been admittedly limited. It was that moment during my first ever kaiseki experience at a picturesque hillside hot spring ryokan near Mount Aso, Kyushu, that struck a chord in me.


While kaiseki (懐石料理) - the highly ritual multi-course traditional Japanese meal characterized by small portions, subtle flavors, and impeccable, artful presentation - may rightfully be compared to Western haute cuisine, it most certainly is grounded on values that carry through conventional, ordinary home cooking with its emphasis on simplicity and fresh seasonal ingredients.

I've recently been invited to a friend's place for Japanese style home cooked dinner. With many years of working with a Japanese chef, he swiftly prepared a light but satisfying meal featuring primarily vegetables - with the help of relatively few seasonings.

In stark contrast to most Asian cuisines driven by a variety of sauces and condiments, a large number of dishes in Japanese home cooking are created from just five basic seasonings: mirin, sake, sugar, soy sauce, and dashi (だし, a light stock made from dried bonito flakes and kombu seaweed). One of the many secrets behind Japanese home cooking is "simplicity" - complement the primary ingredients with a delicate touch of seasoning, rather than dominating them; let the natural flavors sing.

One of the dishes made that night was this irresistable braised kabocha (かぼちゃの煮物). Unlike conventional methods of simmering, the pumpkin is first seared at high temperature then finished in the classic seasonings to enhance flavor and texture. A great case in point, a simple handful of seasoning brings out the sweetness of the pumpkin. Topped with barely seasoned pan-fried chicken mince, this simple dish promises to astound with umami. 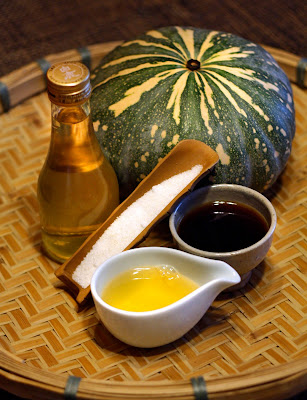 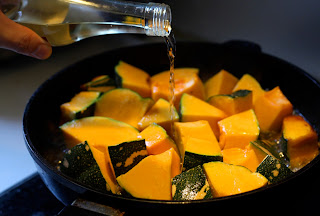 1. Remove seeds and cut pumpkin into 2-inch pieces leaving the skin on. On medium heat, add vegetable oil to skillet and lightly sear the surface of pumpkin chunks, skin-side down first. Stir occasionally to evenly brown the pumpkin, about 4 minutes. 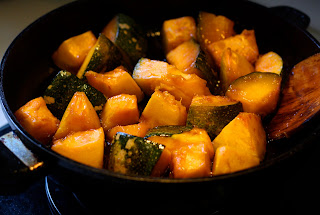 2. Cook pumpkin covered until fork tender on medium heat, 5-8 minutes (cooking time varies depending on type of pumpkin). Add sake, dashi, mirin, shoyu, and sugar and bring to a low boil. Cook until reduced. Plate and set aside.

3. On medium heat, pan fry minced chicken (if using) in a small pan with vegetable oil. Season with mirin and sea salt. Top pumpkin with minced chicken and serve. いただきます！