March is a month with much to celebrate: the return of Spring, the arrival of asparagus, Japanese strawberries, as well as cherry blossoms. It is the month of birthdays when many close friends and myself grow yet another year younger and wiser; it is also when "Alvin's Penthouse Kitchen: the Blog" officially turns three. Yipee! 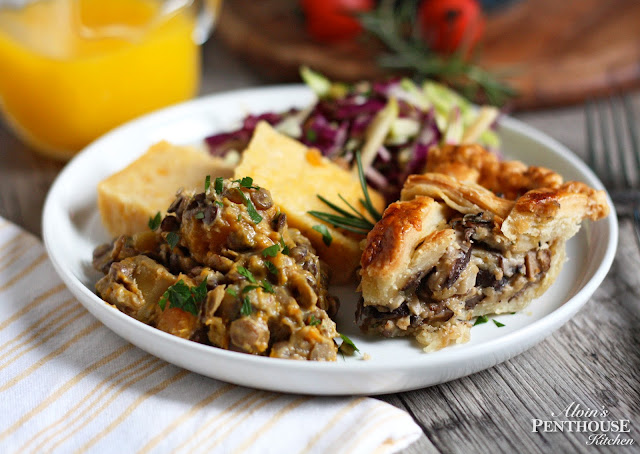 "How about we throw a barbecue down at the clubhouse?" I blankly suggest as my friends and I brainstorm for activities for the Saturday set aside to celebrate our belated birthdays.

"...Barbecue is cool," Eugene stammers, reluctance escaping his tone, "though I'm only concerned that Kenko and I are both vegetarian, and we might not have much to eat. You know."


Indeed, a typical barbecue can be so meat-centric that it is no more a party to herbivores as a boat trip is to someone who stays away from the sun and sea.

And that is when it all suddenly strikes me. "I will throw an all-vegetarian party at home!" The timing could not have been more perfect. It was as if a fire ignited in me. I was determined to pull together my first ever entirely meat-free feast, fueled by my ever-growing interest and fascination in the world of vegetarian and vegan cooking.

Eugene was thrilled. Rarely ever has he been to home gatherings other than those where vegetarians were no more than an afterthought - an inconvenience even, sometimes - where a cold salad and other usual suspects may be the only option.


The thought of a veggie-centric party (complete with boardgames and Pictionary) got us fired up. Kenko insisted on bringing his lunchbox for leftovers, that is if we had any.

I tasked myself to put together a diverse, balanced menu that:
- is simple enough to pull off in a few hours, unless you work turbo speed;
- is fun and fulfilling, potluck style;
- makes use of my existing pantry ingredients;
- is equally appealing to both vegetarians and non-vegetarians

In my moments of brain fart I called up my cousin Kathleen in Toronto, an avid vegan cook herself, for some inspiration. In no time, the menu was set.

The theme of the day was 100% meat-free, but all the more it was about celebrating friendship, and honoring a well-balanced, healthy, and tasty diet. To that we toast!
Stay tuned for recipes to come!