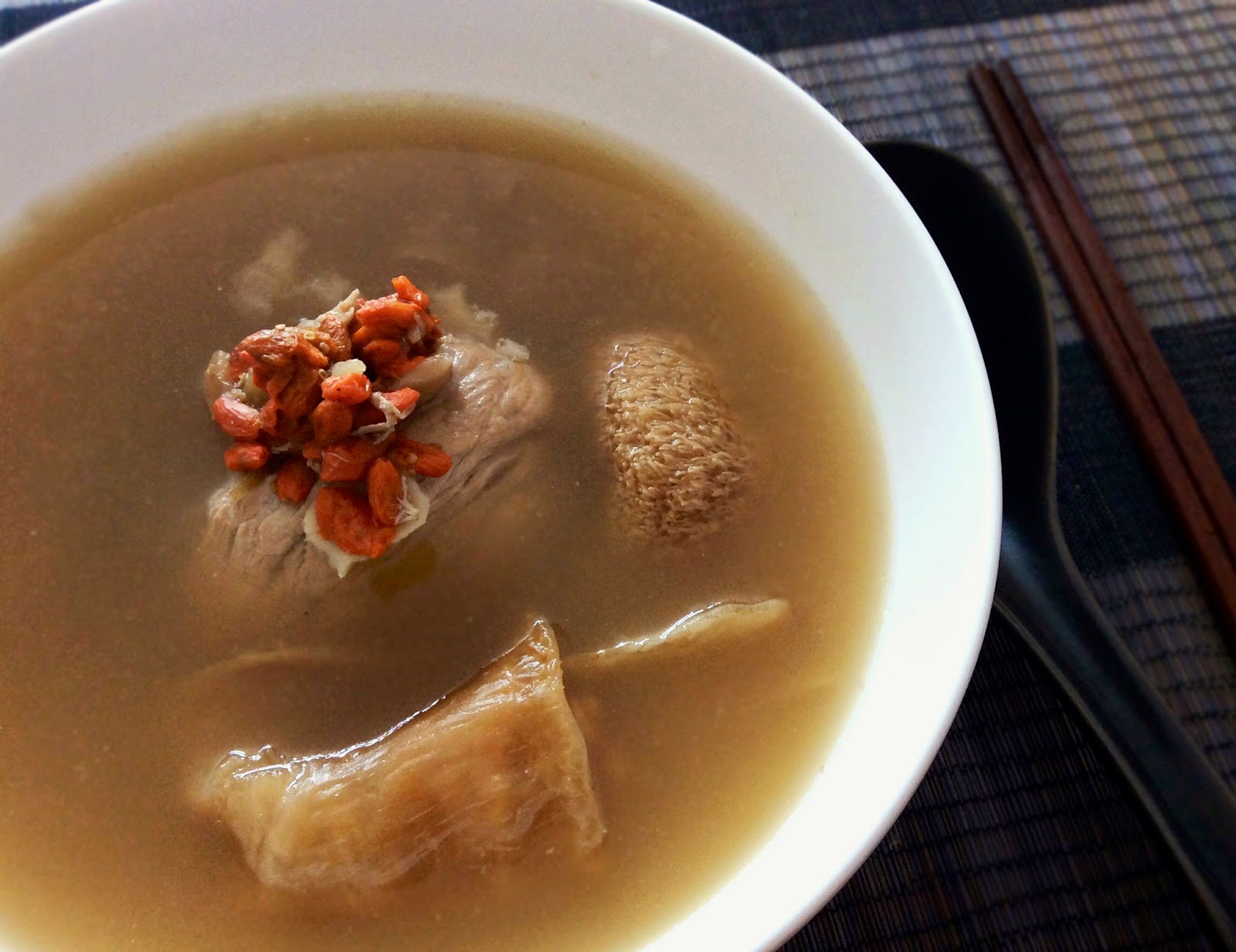 I remember every summer when I returned from my studies in the States, the first thing my mother would have prepared upon welcoming her son back was a giant crockpot of soup - simmered for hours and steeped with delicacies.

Those were the days long before Skype, FaceTime, or smart phones per se had even come into existence. My mother would call long-distance weeks in advance and ask for my preferences for soup. And I, usually crushed under the pressure of final essays, used to brusquely dismiss her overzealousness. "No need for abalone... Why spend all that money? Whatever soup is fine." Then upon returning home from nearly twenty hours of trans-Pacific flying, she would embrace my haggard frame and announce with an anticipating grin what she had decided to cook. Her expression tired but always tender with unspeakable thoughts behind, as she softly watches me taking long sips from my bowl. Satisfied.

How I wish she were still around.

Home-cooked Chinese soups are a labor of love, a deeply rooted and endeared Chinese food tradition, a focal point of family meals. A nourishing bowl of soup evokes nostalgia from childhood times, of a mother's devotion. Importantly, these soups are known for their curative and health-giving properties. Different seasons call for different concoctions of ingredients; the same goes for the various conditions of one's health. Some benefits range from detoxification, a boost for the immune system, restoration of the yin-yang, nourishment of vital organs, to healthful aging.

For all those souls out there like me who live on their own, you probably feel deprived in one way or another of such holistic nourishment (and motherly love). Once in a while, when invited for family-style dinner at a friend's home, a steaming bowl of soup lovingly prepared by the mother could bring tears that I fight back. There is a void that begs to be filled, I admit.

Retail chains such as Hung Fook Tong have exactly tapped into this very market of busy single people, offering ready-made microwaveable soup packs on the go. Authentic and convenient as they are, they still seem devoid of a certain warmth - of that precious personal touch.

As such, I still go about cooking my own on the stovetop, enjoying the aromas seeping through the lid, watching as bubbles fervently rise to the top. After work, after every long trip away from home - jetlagged and spent - I feel a longing for Chinese soups that help replenish, restore balance, and cleanse. And as I hit thirty this year, all the more important it is that I take my well-being in my own hands.

Here is my new favorite - chock full of collagen - that I vow to make at least every other month as a regimen for "healthful aging" and skin nourishment. When I do so, I make a large batch enough for four separate meals. I call them meals because I am the kind of guy that loves devouring the contents of the soup, unlike many who simply discard them (sacrilege). When the soup cools, I pack away several servings in the freezer for those desperate moments after work. 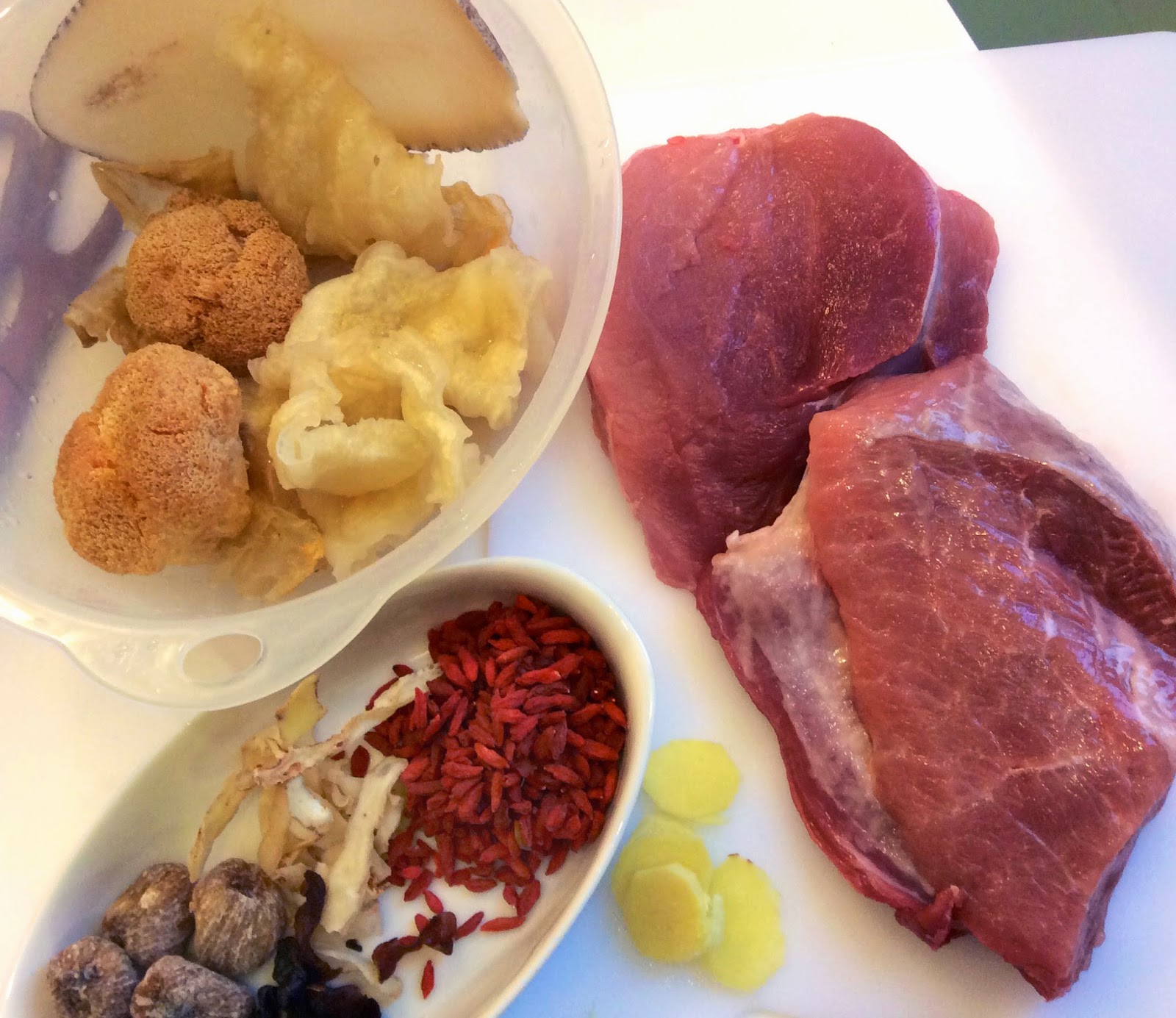 1. Firstly soak the fish maw, monkey head mushroom, whelk, and honey jujube in water for a minimum of 30 mins. Squeeze out excess water from mushrooms.

2. Meanwhile, in a small saucepot, add pork and a couple slices of ginger and fill with water. Bring to a rolling boil, until the outer sides of the meat have turned white and the bones (if any) have ceased bleeding, 3-4 minutes. This is a crucial step in preparing Chinese soups involving meat to remove any unpleasant bloody odours as well as the unsightly brown film that arises from the meat. Remove the pork and give it a quick rinse under the tap. 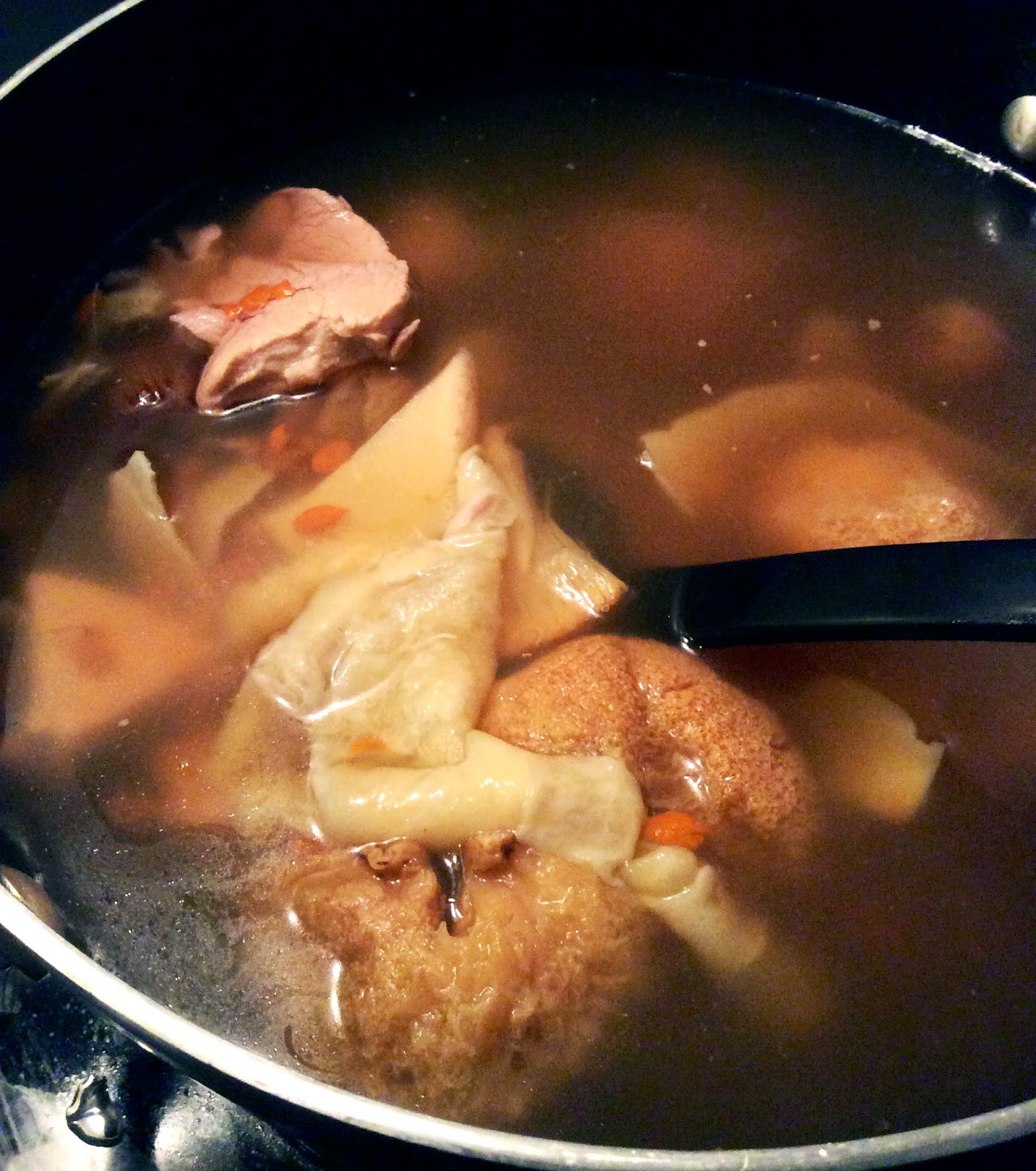 3. Now, add the pork, remaining ginger slices, and the rest of the ingredients to a large pot. Fill with 8 cups of water. Cover pot and bring to boil, then lower heat to a simmer for 2 hours. The soup should appear brown and send off a lovely aroma that smells of childhood... sweet ocean, and luxury.

4. Serve in bowls and season with salt to taste. I have a personal preference for fish sauce.

The pork is meltingly tender, the collagen from the fish maw so evident that the soup literally coagulates in the refrigerator. Making Chinese soup takes time, but the result and benefits are truly rewarding.

[Any thoughts or comments? I'd love to hear from you. Please share with me below!]
at 8:01 PM